Fibre Optic Attenuators can be grouped into two categories;

Further groupings are made by cable type;

We will be solely concentrating on “Fixed” (FOA) Attenuators in this article.

So what is a Fixed Fibre Optic Attenuator?

A fibre optic attenuator is a “passive device” that is often used for reducing the power level of an optical signal.

A passive device is one that does not require power to function. Passive devices we know and use are fibre optic patch leads, connectors, adaptors and to a lesser degree the topic of today “attenuators”.

Attenuators may be needed when the signal arriving at the receiver is too strong! This may overload and or even damage a receiver.

Generally speaking, multimode systems do not need attenuators. Multimode sources such as LED’s or VCSEL’s seldom have sufficient power output to saturate a receiver. Having said this though, multimode attenuators do exist and are available.

Singlemode systems, however, where stronger lasers are used, particularly in shorter runs, can have too much power and may need attenuators.

How do Optical Attenuators work?

Optical attenuators function by absorbing light. You might compare this to how sunglasses absorb rays of light from the sun, protecting our eyes from any harmful ultraviolet light.

In fibre optic attenuators we achieve this reduction in power bymeans of absorption, reflection, diffusion, scattering, diffraction, or dispersion.

A fibre optic attenuator using any of these methods can effectively reduce the strength of the signal.

How are they designed?

The most common version of attenuators is male to female. These adaptor style attenuators simply mount on one end of a connectorised fibre optic cable (female adaptor) allowing that cable to then be plugged into the receiving equipment or patch panel (male connector).

They mate to any connector of the same ferrule and connector type such as 2.5mm FC, ST, SC, and 1.25mm LC connectors.

Attenuators can be made by introducing an end gap between two fibre’s (gap-loss), angular or lateral misalignment, (deliberate) high loss fusion splicing, inserting a nonaligned density filter or even by putting stress on the fibre.

Fixed attenuators, as the name suggests, are designed to have a fixed attenuation dB loss. Usually, this is between 1dB to 20dB. Common attenuators used are 1-2-3-5-10-15-20dB in loss. In theory, they can be designed to provide any amount of attenuation that is required. The output signal is attenuated relative to the input signal. They have a working wavelength range in which they absorb all light energy equally.

So what are some of the applications for attenuators?

Some attenuators are required only for temporary tests, while others are permanently integrated into network systems.

Attenuators can also be used for stress testing a network link. By incrementally reducing the signal strength until the optical link fails. This helps determine the safety margin for the existing signals.

The chart below will give you an idea of the percentage of attenuation of your signal for a specific dB value for optical links.

How do you calculate the required attenuation dB value required?

You will need to be able to determine the attenuator value in decibels required for your specific application.

This is called loss budgeting. This confirms the equipment will operate over the link suggested. There are two budgets we need to take into consideration.

The power budget refers to the amount of loss that a data link (transmitter to receiver) can tolerate in order to operate properly.

Let’s base our calculations on some givens; Input and Output power of the transmitter and receiver are always a known value.

The maximum optical input power of the fibre-optic receiver used in this example we will say is -6dBm. We now know that if the input power is greater than this power level, the receiver will be overloaded.

The transmitter, which is located 10 km from the receiver, has an output power of 3dBm.

The loss for 10 km of Singlemode loose tube optical fibre, including any splices and interconnections has come in at 2dB.

To calculate the minimum attenuation required to prevent the receiver from being overloaded, we need to subtract all the known losses from the output power of the transmitter as shown here:

At a minimum, a 5 dB attenuator is required. However, an attenuator with a larger value could be used as long as it does not over-attenuate the signal. 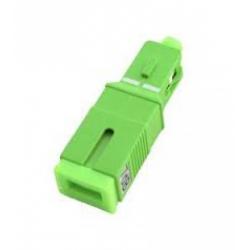 Some attenuators are required only for temporary tests, while others are permanently integrated into network systems. With fixed attenuation rates from 1db to 20dB available for use.

Whatever the reason for needing them, Attenuators will always have a place in our fibre optic bag of tricks.

“HOW TO USE” instructions for Fibre Optic Cleaning Pens - for both enclosure applications and for cleaning connector end-faces.

Cleanliness according to IEC standards.The IEC developed the 61300-3-35 Basic Test and Measurement ..