Everything You Need to Know: CAT6 Cables

What is Cat6 Cable?

Defined by ANSI/EIA/TIA Category 6 cable is also known as Cat6 for short.

Cat6 is a standardised twisted pair cable for use in Ethernet and other networks.

The only difference between these configurations is that pairs 2 and 3 (orange and green) are swapped. The cables pins are typically a “straight-through” configuration.

Performance is compatible as long as both ends of a cable are terminated exactly the same.

Being the sixth version of twisted pair Ethernet cabling, CAT6 was created in order to support the Gigabit Ethernet Data rates. It has been designed with a bandwidth of up to 250MHz.

It has 4 pairs of copper wire and all 4 pairs are used in Gigabit Ethernet applications.

The main feature is that it can support 10 Gigabit Ethernet connections for a distance of  37-55 meters (depending on crosstalk).

The benefits of Cat6 cable are numerous.

This means it can work with older systems without the need for a complete technological upgrade.

- Cat6 cables are more tightly wound and can feature 2 or more twists per cm, depending on the manufacturer.

- Cat6 cables also have a thicker sheath in comparison to Cat5e cables.

This helps protect the cables against Near-End Crosstalk (NEXT) and Alien Crosstalk (AXT).

-  Cat6 technology uses all four pairs to achieve its high levels of performance.

The benefits of Cat6 does not stop there. Its performance is better and more versatile.

The improvements made from Cat5 to Cat6 include:

- and a better signal-to-noise ratio.

That means better reliability and fewer errors and data losses.

It’s, therefore, no surprise that this category of cable became the obvious preference for those operating in network installations.

Constructed to provide Ethernet transmission speeds of up to 10 Gbps, so when you need speed, Category 6 (Cat6) Ethernet cable is up to the task. 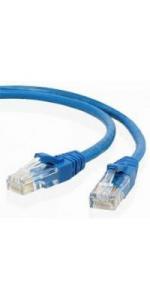